Back to all posts

Return of the 17-Year Menace!

If you're located in West Virginia, you all know exactly what I'm talking about... 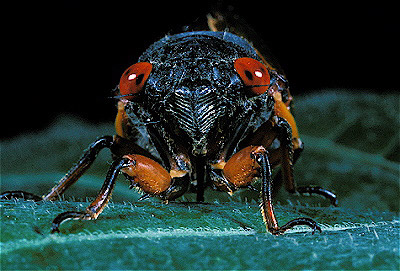 Little red-eyed buggers projecting themselves like buzzing, screaming missiles that land on you and freak you the heck out. That's right. The 17-year cicadas are out in full force.. Though they really don't hurt anything... they're just kind of big, and noisy, and they love to scare the crap out of you. ^_^

The Anti-Strawberry Festival Show was an amazing success! We anti-festivaled like there was no tomorrow, and our labelmates, Sick_Bob and the Symptoms, shot their video that night. Joining us was Brasstaxx, and Adam Moyer, and it was an absolute blast!

Check it out here

We have a bit of a break for the rest of June, but we will strike again in July, with a double whammy of shows on July 16 and 17.

July 16, we play Morganfest, a benefit show in honor of the Morgan Family, who suffered two losses in May. One of the members of the family was Swamp Drag's dear friend, Steven. Steven was the guitarist for No Strings Attached, and we played a couple shows with them. Steven was also a fan of Swamp Drag, and he came out to our Anti-Strawberry Fest show. Steven, you will be sorely missed. Rock on, brother.

July 17th, we return to the Main Street Cafe with our brothers in Hoof and Electric Green Machine, and our soon-to-be new friends, Crab Legs. Come on out, because this show is gonna be one you DON'T want to miss!

See you at a show soon!